The answer is most probably, yes, even if just for the first few weeks.

It’s so easy to over eat food based on what you perceive to be a portion or serving size.

Doing this at every meal/snack you have isn’t uncommon and can add up to hundreds of extra calories daily which will over a week will stop fat loss happening.

Here are just a few examples:

Half a cup of oats weighed vs scooping half a cup of oats, going to be around 60 calories difference, next time your having porridge put a bowl on some scales and then chuck your oats in ,you may be surprised but how many grams your eating! 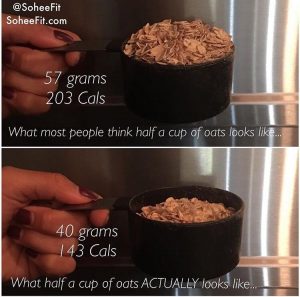 Nut butters are delicious but they aren’t really as ‘healthy’ as most people think. Sure they have some protein and minerals but nothing you can’t get from other sources which contain significantly less calories.

The peanut butter on toast shows that 15g peanut butter vs 40g isn’t visually that different but the calorie difference is certainly noticeable. 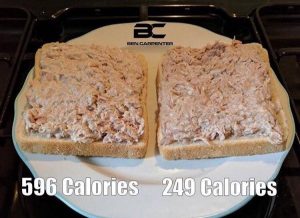 Weighing your food shouldn’t be a chore it’s pretty quick and easy and after doing it for a little as a week you should be pretty good at eyeballing foods, I don’t do it year round just when dieting and I would recommend you do to.